Will McLaren’s US$2.3 million supercar see it overtake Aston Martin, Lamborghini and Ferrari?

Will McLaren’s US$2.3 million supercar see it overtake Aston Martin, Lamborghini and Ferrari?

All 106 three-seater, limited-edition hybrid Speedtails – with a top speed of 250mph – have sold out as the British firm’s offerings target high-end buyers 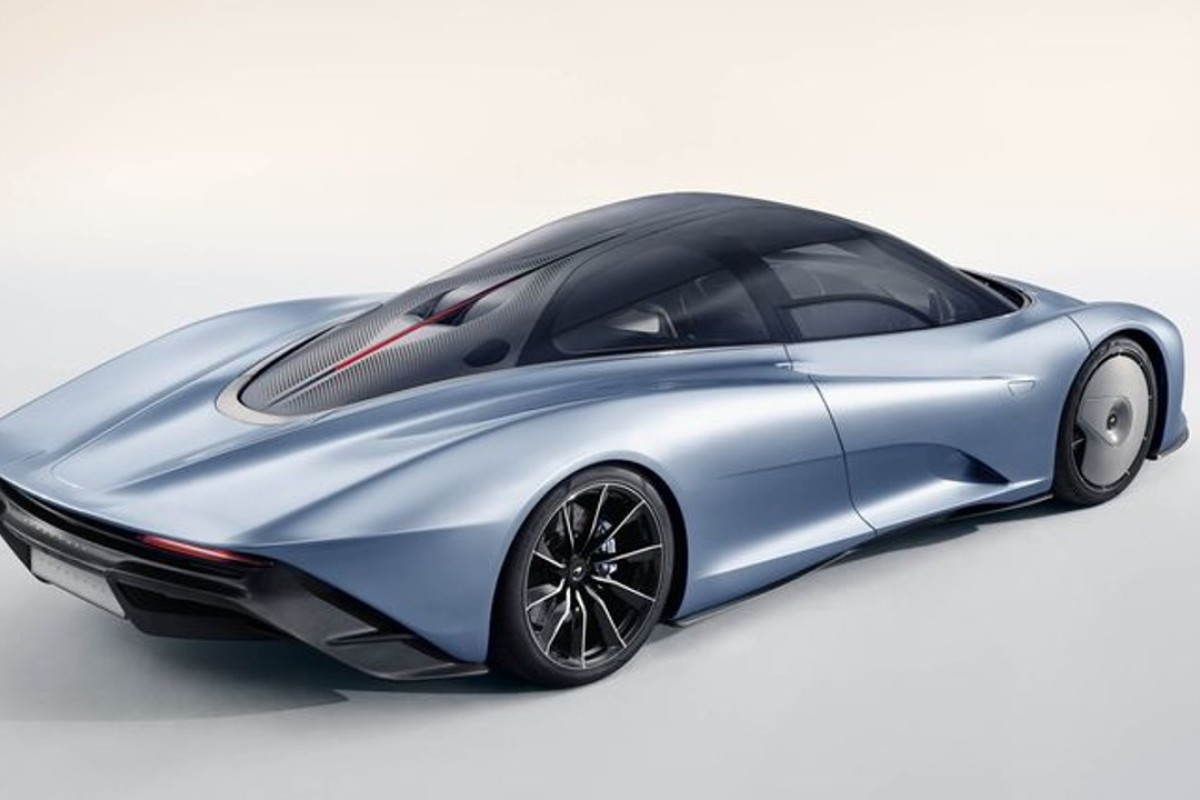 McLaren’s petrol-electric hybrid, the Speedtail, which can accelerate from 0 to 186mph in only 12.8 seconds and has a top speed of 250mph, is the British carmaker’s fastest model yet.
MORE ON
THIS STORY 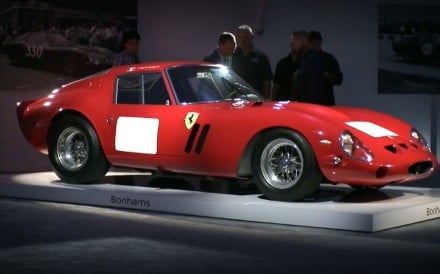 The all-new, three-seater “hyper-GT” is the latest model in McLaren’s Ultimate Series, the most expensive and exclusive line offered by the carmaker.

The P1 and Senna also belong to the Ultimate Series, while others you actually have a chance of seeing on the road, such as the 720S and the 570S, belong to the Super Series and Sport Series, respectively.

In addition to its big price tag and odd seating arrangement (more on that later), the Speedtail is an homage to the iconic McLaren F1, which held the production car speed record of 240 miles per hour (386km/h) from 1998 to 2004.

McLaren will make only 106 of them – a number that matches the F1’s production run – and they are already sold out, a McLaren spokeswoman said.

That response is similar to when McLaren debuted the US$1 million Senna, which the carmaker said sold out before it was formally announced.

For a company that sells fewer than 3,500 cars annually, the margins for such extreme cars remain considerable. (So does the waiting-time: Speedtail owners will not see the car delivered until 2020.)

Which is to say the strategy is working: the Speedtail is the first of 18 new cars or derivatives to be announced under McLaren’s “Track25” business plan – the company’s grab at an additional £200 million per year, financed from deposits taken from customers willing to buy such expensive, extreme cars 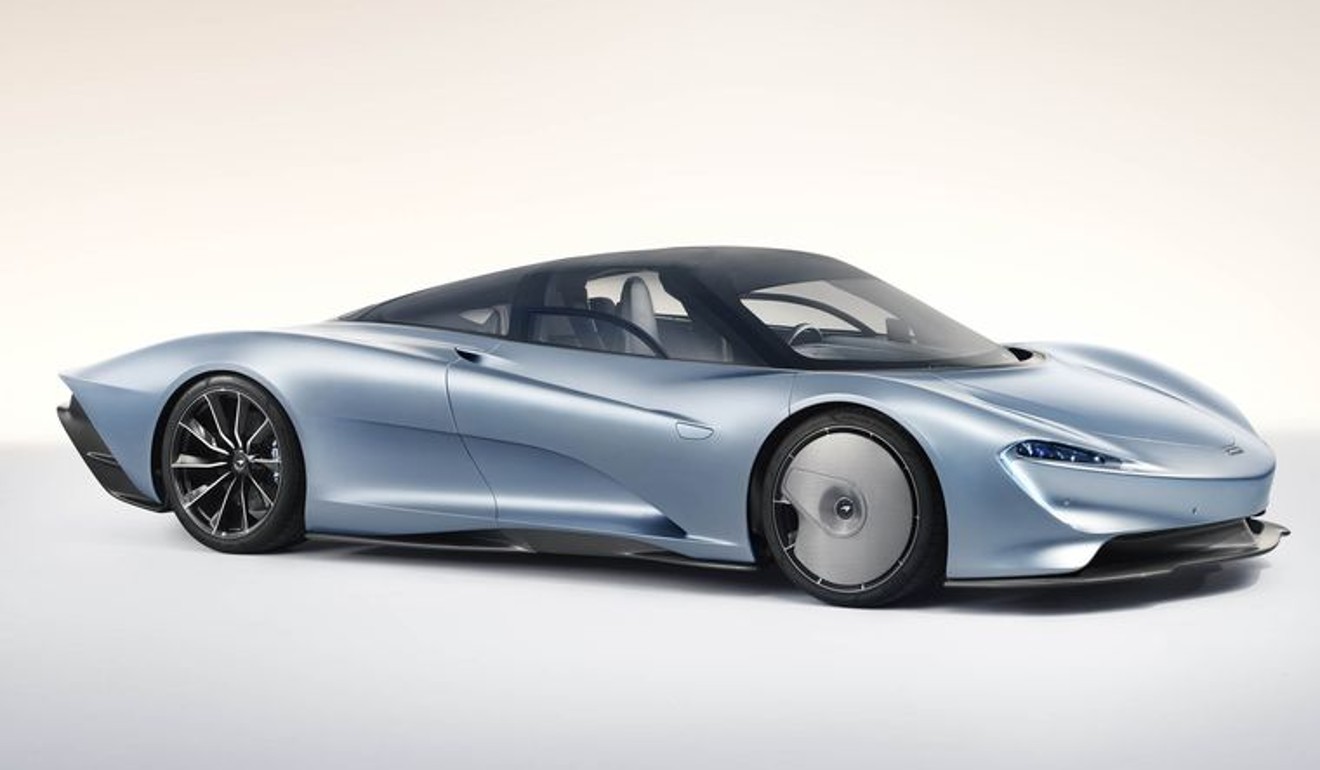 The Speedtail is McLaren’s latest supercar aimed at enhancing its stature in the luxury and lifestyle market.

It’s also the latest move by the company based in Woking, in southern England, to enhance its stature in the luxury and lifestyle market.

McLaren first gained prominence for its Formula 1 racing success – the late famed Brazilian driver Ayrton Senna competed under its marque – and then earned respect for the laboratory-precise driving characteristics and video-game styling of its production cars.

However, it has yet to achieve the level of interior comfort and entertainment and exterior fit and finish of the higher-end cars produced by Ferrari, Lamborghini, Mercedes-Benz, Bentley and Aston Martin. 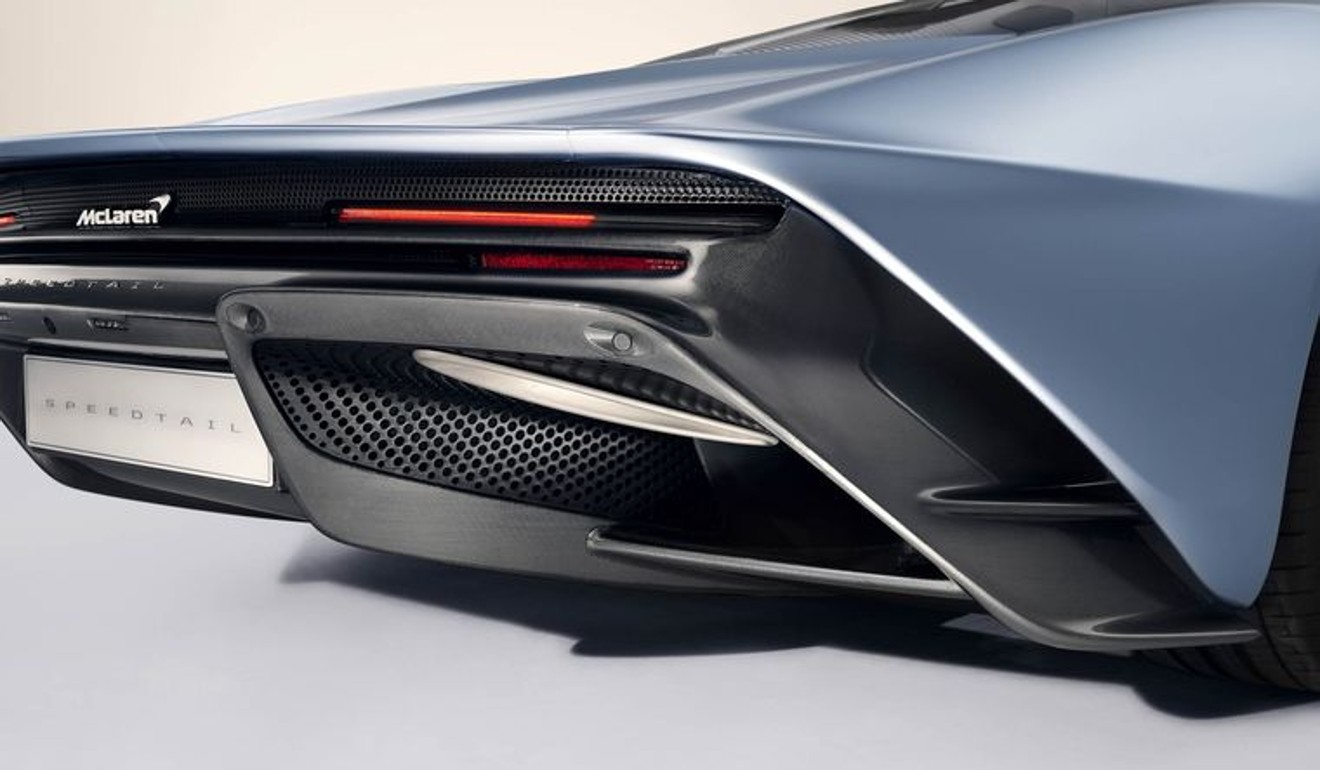 Buyers are in for a treat.

The Speedtail is ultralight (3,153 pounds, or 1,430kg) for its size, with an active suspension and lightweight carbon ceramic brakes that enhance its nimbleness and handling. It’s more powerful than the Senna and its F1 forebear, with a hybrid-electric power train that can reach 1,035bhp and a top speed of 250mph.

That’s enough to indicate that McLaren might possibly break the current production car land-speed record of 277.87mph, which Koenigsegg set last year – although McLaren’s boss Mike Flewitt has said jumping into the fastest-car fray with Koenigsegg, Bugatti, and Hennessey is not an explicit goal.

“These days, we prefer to let our customers set the records,” the company says. 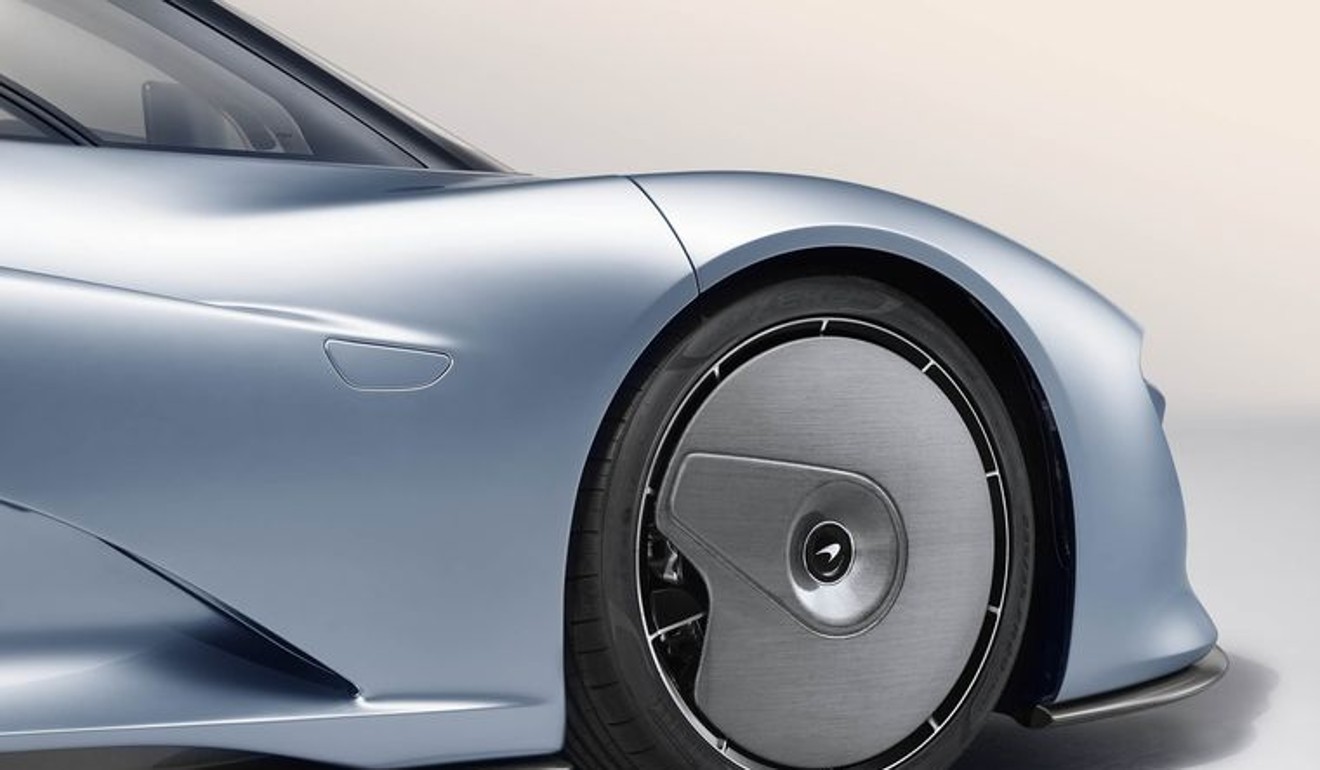 Officially, at least, McLaren says the Speedtail is all about the joy of the open road.

Its exterior style looks softer than those of previous McLarens, with a teardrop-shaped cockpit and an aerodynamic, all-carbon-fibre body.

It’s both longer and narrower than the P1, with easy-to-open dihedral doors and retractable digital rear-view cameras in lieu of mirrors.

The front splitter (an extension below the front bumper), diffuser, and side skirts are all finished in a special “titanium deposition” carbon fibre that is lighter and stronger than that of previous cars. The “Velocity Active Chassis Control” can lower the Speedtail by 1.4 inches (3.5 centimetres), leaving its highest point just 3.7 feet (1.1 metres) from the road.

Raising the car high enough to navigate steep driveways and speed bumps will be rather more difficult. 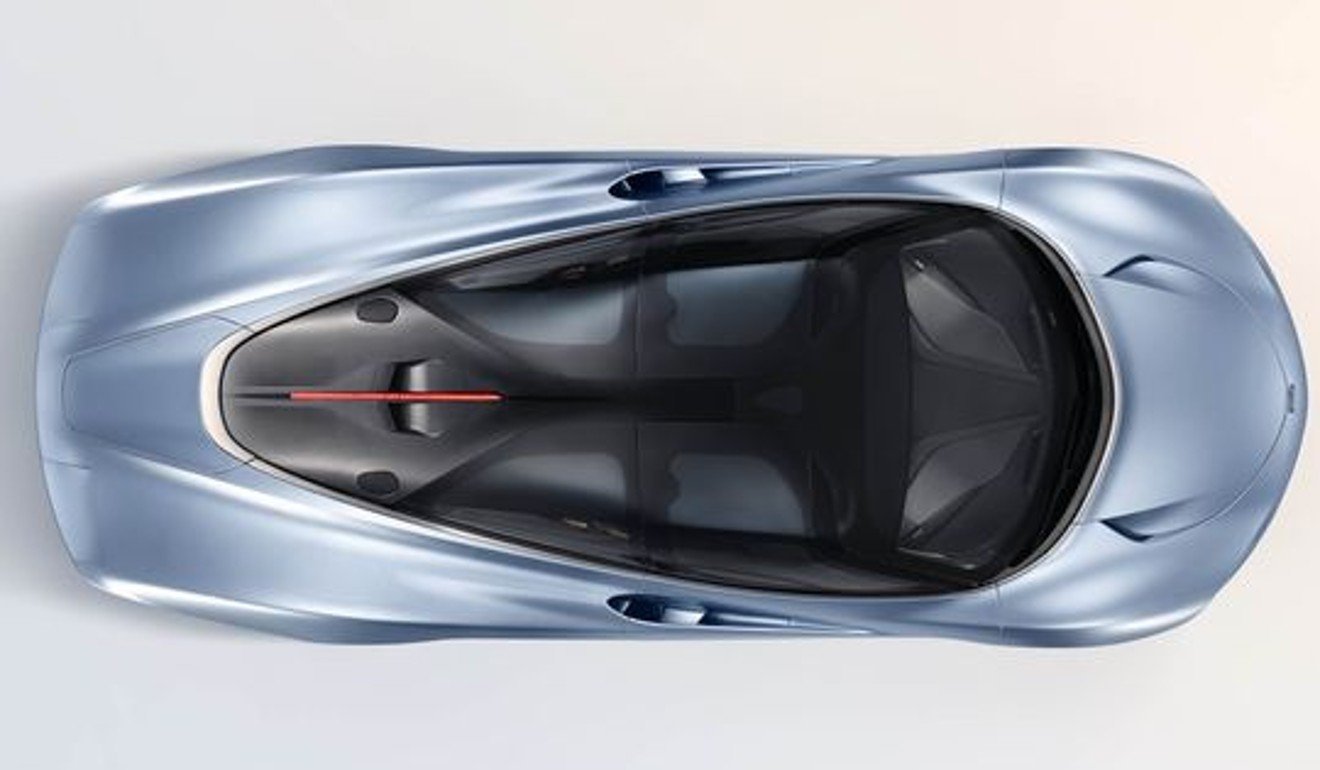 A bird’s-eye view of the 250mph McLaren Speedtail, with its teardrop-shaped cockpit.

Inside, the Speedtail is clearly the most luxury-focused model McLaren has made.

It features such creature comforts as electrochromic glass that darkens the top of the wind screen at the touch of a button – removing the need for sun visors – and there’s actual luggage space in both the front and back.

Engine controls shine in polished aluminium and are set in panels above the driver’s head.

That overhead control panel, as well as the gear lever paddles and steering wheel clasp, also uses a separate kind of highly refined carbon fibre made in partnership with luxury watchmaker Richard Mille. 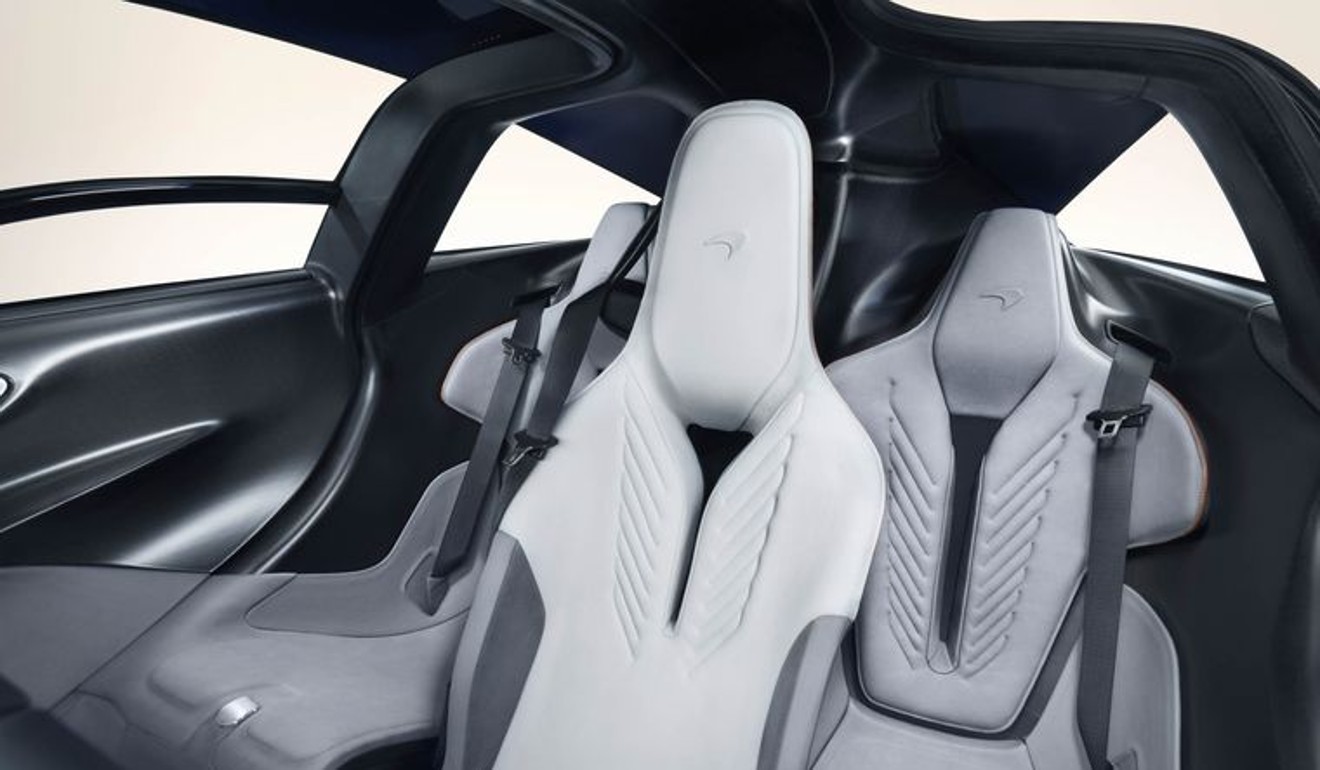 The inside of the car – clearly McLaren’s most luxury-focused model – features a layout with a centrally positioned driver’s seat and two passenger seats directly behind.

For further luxury, the McLaren Special Operations team can oblige with optional platinum or 18-carat white gold-and-carbon fibre badging and inlays, instead of the standard gloss-black on aluminium.

The team exists to make special customised McLarens for the company’s most valued, wealthiest clients, such as the hunter-green Senna for mattress tycoon Michael Fuchs.

The badges, which come in a set of three, are cut in the UK by Vaughtons – the same 100-year-old company that makes Britain’s Olympic medals – and dramatically increase the cost of the car by at least £50,000.

For those worried about the additional weight of a golden or platinum badge, a special, lacquered-on golden badge is available, too. 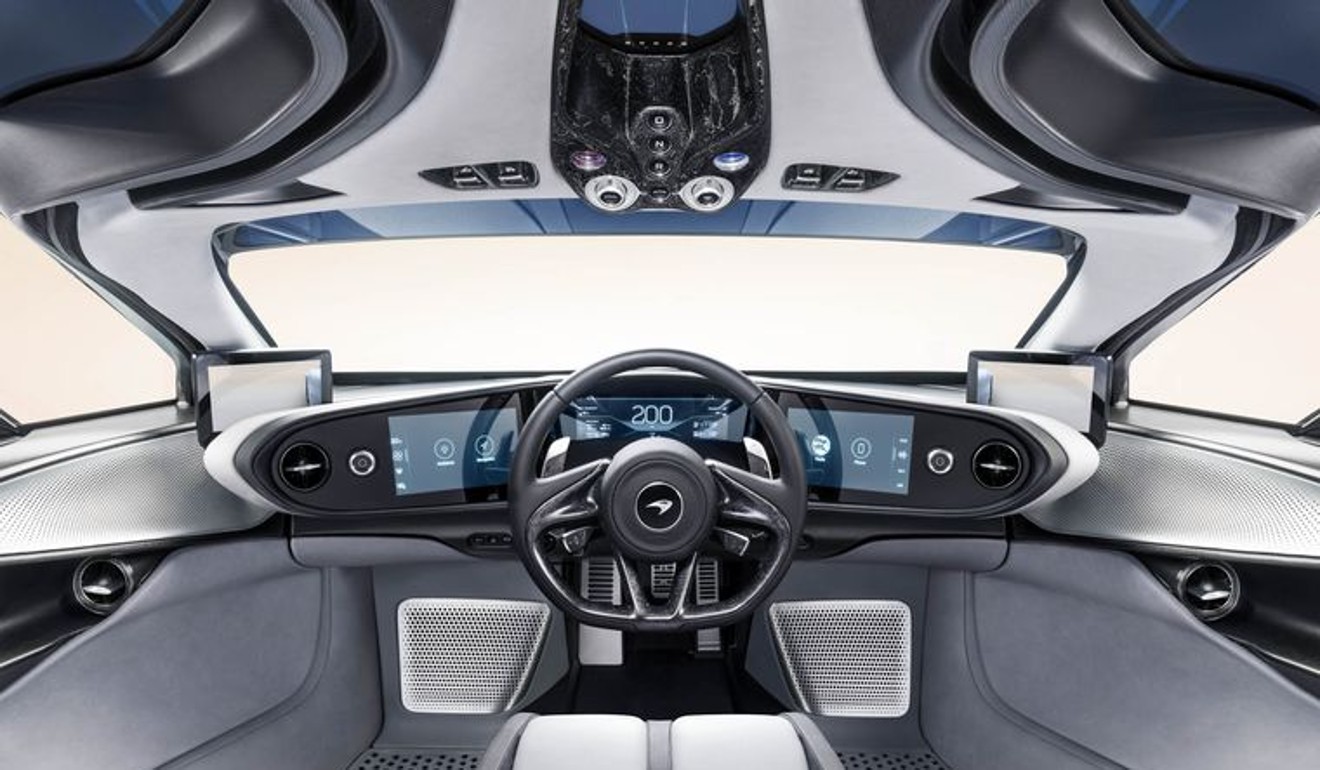 The layout of the interior of the Speedtail, with the centrally mounted front seat and steering wheel, is aimed at enhancing the driving enjoyment.

The three-seat layout is meant to enhance the overall driving enjoyment and feeling of splendour: the driver sits in the centre of the cabin, with the most commanding view of the road possible, while a passenger sits on either side.